Colossal Statue of Amon Ra and a coin with Alexander the Great depicted wearing the Horns of Amon Ra.  Next is a goat as depicted in the book of Daniel and the four Kindoms that follow the death of Alexander 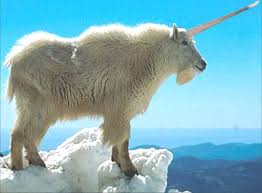 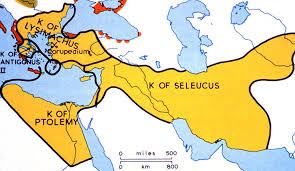 The dispute about drawing a cartoon of  Mohamed is an ongoing struggle betwen the values of the West rooted in the democratic history of Greece versus the despotism of the Orient inherited by Islam.

The movie entitled the “Three Hundred”  is actually historically accurate. The Spartans did cast into a well those Persian Ambassadors asking for offerings of earth and water as signs of Greek submission to Persia . The reply of the Athenians was similar in that they said they would resist Persia ” as long as the sun rose in the sky”.

According to Harvard educated History Professor R. Fears  it was the Macedonian Alexander the Great who was willing to abandon Greek democracy and instead take on the role of an Oriental despot. The Professor  also argues that the middle east has never really understood nor valued freedom in the manner the West in the tradition of the Greeks have understood it.

Philip and his son Alexander arose from Macedonia which while Greek did not have the same attachment to freedom the other city states of the Peloponesian peninsula exhibited. Macedon never had a democratic tradition but instead had a long tradition of kings and a running history of assassination followed by new weak kings.  Philip and Alexander were a unique father son duo of gifted great military leaders.

There is reason to believe that Alexander Great possibly made his full decision on these matters when he was proclaimed a divinity at a Holy place. He was declared a successor god in to Amon Ra at  the Eygptian Temple of Ammon Ra. ( http://www.karnak3d.net/)

Amon had been the sun god of the lower kingdom of Egypt and Ra the sun god of the northern kingdom They were united in office and name at the time of the uniting of these two kingdoms. From that time on Alexander encouraged the belief that he was a deity in the manner of the oriental kings and he had coins struck which showed him with the helmet and  two horns of Amon Ra.  Reportedly the priests of Amon Ra told him he would be undefeated in battle and that he was not an ordinary human. They told him he was  a deity.   The Jewish Historian Josephus also reports that the Jewish  High Priests came out from Jerusalem in full High priestly regalia to meet Alexander and showed him the discussion about himself in the book of Daniel. The God Amon Ra also picked the attributes of the Kushite god with its symbol from the ram. From that time forward Amon RA was also signified by the rams horns. Alexander was accorded the deity of Amon Ra by the Egyptian Priests and crowned with a headdress of rams horns.

The book of Daniel however depicts Alexander as a goat with one horn.

This fact may be used to refute those who claim the book of Daniel was written AFTER the death of Alexander. If it were written AFTER the death of Daniel and Alexander then common usage would have required Alexander to be depicted with two horns and not one horn .It would have had to ackowledge the well known association of Alexander and the rams horns. To this very day tales are told in the middle east about Alexander the two horned. Only the Bible describes him as one great  horn who is followed after his death by a split into four horns and kingdoms.

The Middle East without its understanding of freedom is to this day still  ruled by despot Kingdoms. They do not understand the western traditions of freedom. In our current war against Islamic terrorism we should not sacrifice our traditions of freedom to nations of the middle east who value other aspects of kingdom and religion. The roots of the battle between Occident and Orient did not begin at 9/11. There is a clash of civilizations and if there is to be an Alliance of Civilizations as some would have it should not be based on the West sacrificing it’s core historical values of freedom. In addition if the Bible is correct about the arrival of a little horn which then grows to become great horn on his way to triumph in the middle east and eventual worldwide power it may begin in the traditions of the middle east. It is currently difficult to imagine anyone claiming deity. Nevertheless with enough military and political success it may be possible to delude the nations even as has been accomplished so many times before and proclaim a god King. Japan after world war two would only deny the deity of  Emperor Hirohito  by force. Hirohito was allowed to stay on the throne but denied status as a god. This was also a battle between the autocratic East and the Democratic West. The battle continues to our day. It may surprise us and emerge in the open again if there arises a military victor who enters into a Holy Place and in a similar manner of the Oriental despot Alexander the Great claims deity. He did so in order to gain mastery of the world. It has happened before many times and it may happen again.